Since 1761, only two owners have owned O. L. St. John Farm.  It spans a half-mile across a rounded valley of rolling verdant meadows outside Woodstock, Vermont. The St. John family shares some memories.

In 1966, our father and mother drove to Vermont from Connecticut in search of 13 acres of land and a spring. After viewing several properties in the Woodstock and Peacham areas, and not finding exactly what they were looking for, they walked into a realtor’s office in Woodstock to inquire into what else might be available. The realtor suggested they drive up to Dick Dana’s old farm on Old King’s Highway to see if he might be willing to sell off a small parcel of his farm. 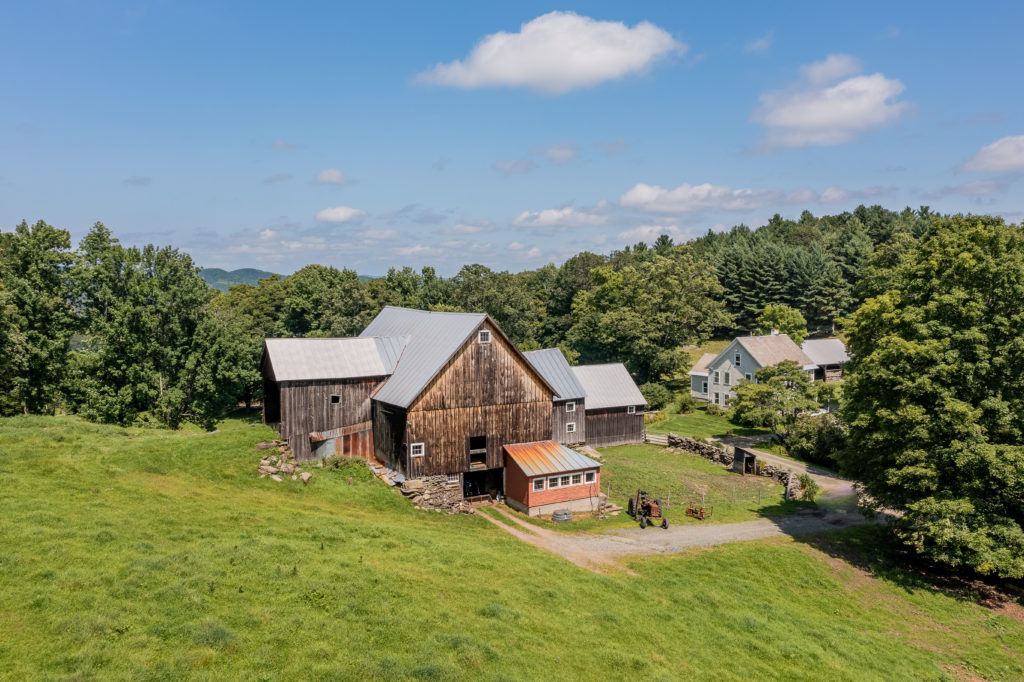 Upon seeing the farm, they immediately fell in love with the property, the views, and the history of the farm. They aborted the 13-acre idea and, much to their family’s dismay, bought the entire farm, all 387 acres!  It included the farmhouse and multiple barns (all but one still stand today). For the next 10 years, they spent the weekends restoring the old dairy farm to a full working farm where they raised beefalo, horses, sheep, pigs, chickens (laying hens and meat birds), guinea hens, bees, dogs, and many barn and house cats. 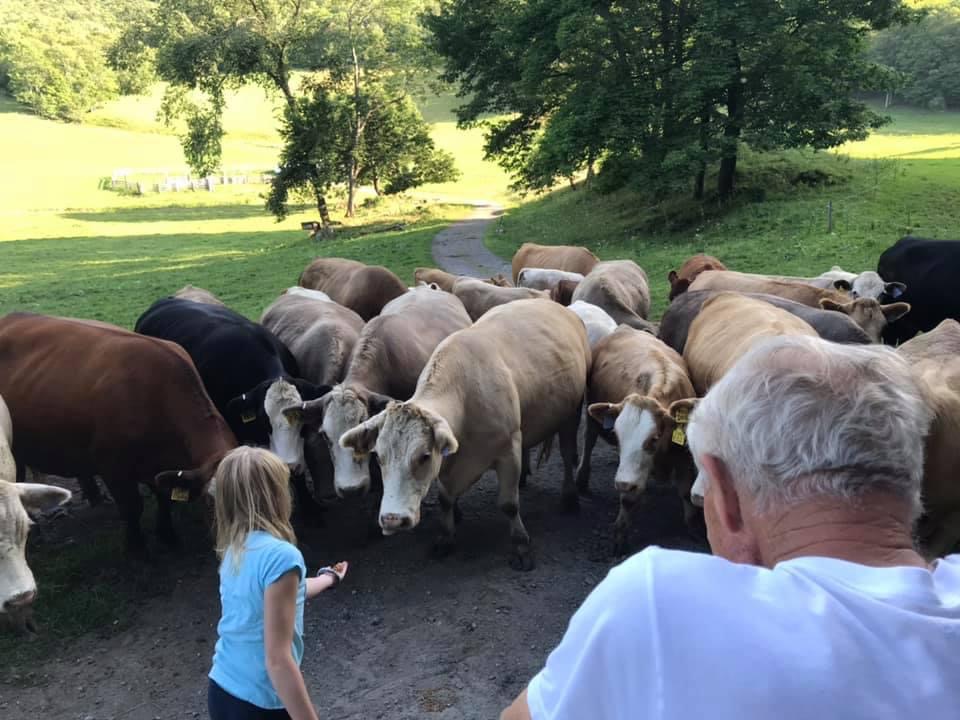 While our dad had no experience with farming, our mother was born in Africa to a British father who was trained and educated in cultivating the land. Our grandfather worked all over the world helping third world countries with best farming practices. While still a British colony, our grandfather ran a 10,000-acre plantation at the base of Mt. Kilimanjaro in Tanganyika (now Tanzania) and cultivated the land and grew crops. They grew coffee, wheat & pyrethrum (an ingredient in insecticides). He met our grandmother there, who was from Sweden but spent time in Africa as a child with her father, a big game hunter who loved to hunt in Africa.

Our grandparents were married in Africa and raised 5 children there. My mother would tell us tales of how a young elephant bull went on a vandalism streak and trampled their personal garden and how she would sleep with a knife by her bedside in case a snake crawled through the open windows to find a warm bed to curl up in. She also learned to fly a plane at age 13 for supply runs. 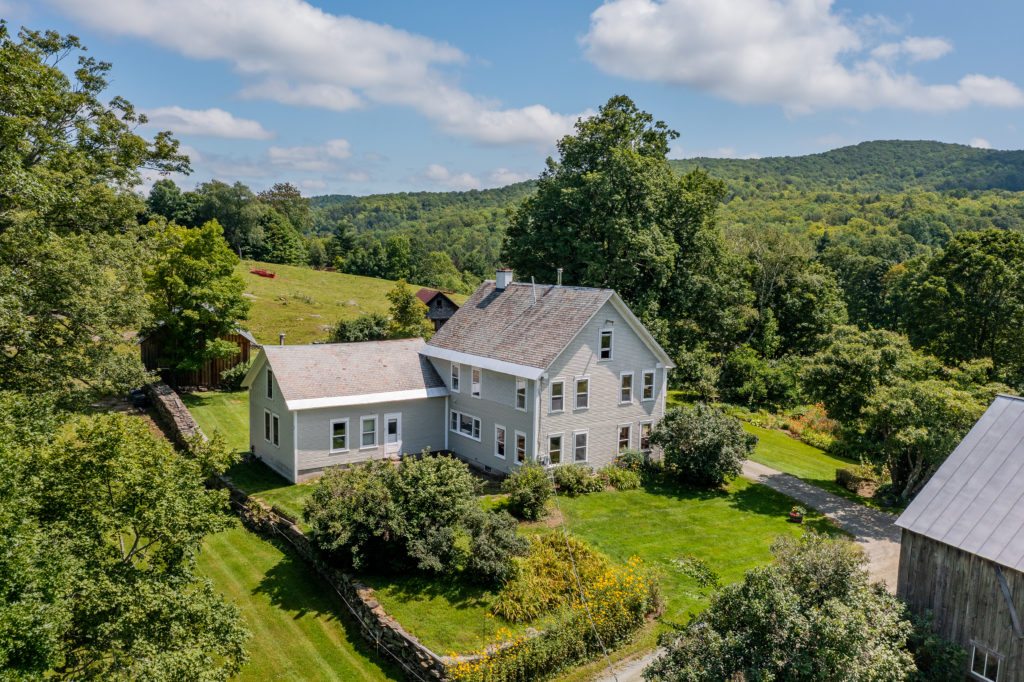 Our mother grew up with a love for farming, the land, and caring for animals, and she brought that with her to the farm in Vermont. She understood and applied organic farming practices before “organic” was even a term. Our guinea hens were one such application! Our mother had a huge passion for gardening (both flowers and vegetables). Two common garden pests were the Japanese beetle and the Potato Bug. Rather than using pesticides, our mother invested in a flock of Guinea Hens to eat all the beetles & bugs in the garden.

One funny tale regarding those Guinea Hens is that once they left the chicken coop, we could never catch them again. They chose to roost in the big Maple tree by the house. At first light, those Guinea Hens would start making a huge racket. Although the early wake-up did not bother our parents, it was definitely a huge hardship for the teenagers in the house! In the garden you will still find red currant berries and gooseberries – these were imported by our mother from her sister’s gardens in England!

The kitchen and dining room are where our family congregated at the beginning and end of every day. Our mother loved to cook and most of what we ate came from the farm – whether it be the beef, pork, lamb, chicken/eggs (or even brook trout!) or the vegetables from the garden in the summer and fall. She would make the most amazing soups from scratch for lunch. The smells of cooking onion, garlic, and bacon would lure everyone into the kitchen to find out what she was making. And if we were out in the fields, she would clang the bell on the front porch and yell “lunchtime!” to call us home. We always had a salad every night – greenery and vegetables from the garden and the salad dressing was always homemade.

The vegetable garden used to extend from the berry bushes almost all the way to the stone walls.  It was probably 1/2 an acre.  Our parents grew almost every vegetable you can think of – lettuce, green beans, peas, snap peas, peppers, onions, leeks, potatoes, tomatoes, broccoli, cauliflower, carrots, Jerusalem artichokes, corn, etc.  Our mom used to start seedlings in the basement before transplanting to the garden.  And then by the back door to the house was the herb garden with even edible flowers.  We used natural fertilizers from the barnyard and chicken coop.

Our mother canned and pickled vegetables and fruits to be eaten during the winter months. Weekday breakfasts were homemade granola with fresh raw cow’s milk where you had to scoop the cream off the pitcher before pouring. Weekend breakfasts were always pancakes with maple syrup made from the maple trees on the property. But be sure you check the pitcher of milk before making your batter! Once when our brother was about 10 years old, he mistakenly made pancakes with calf milk replacer and tried to then serve it to our aunt who was visiting. Let’s just say the taste was not quite what she expected! 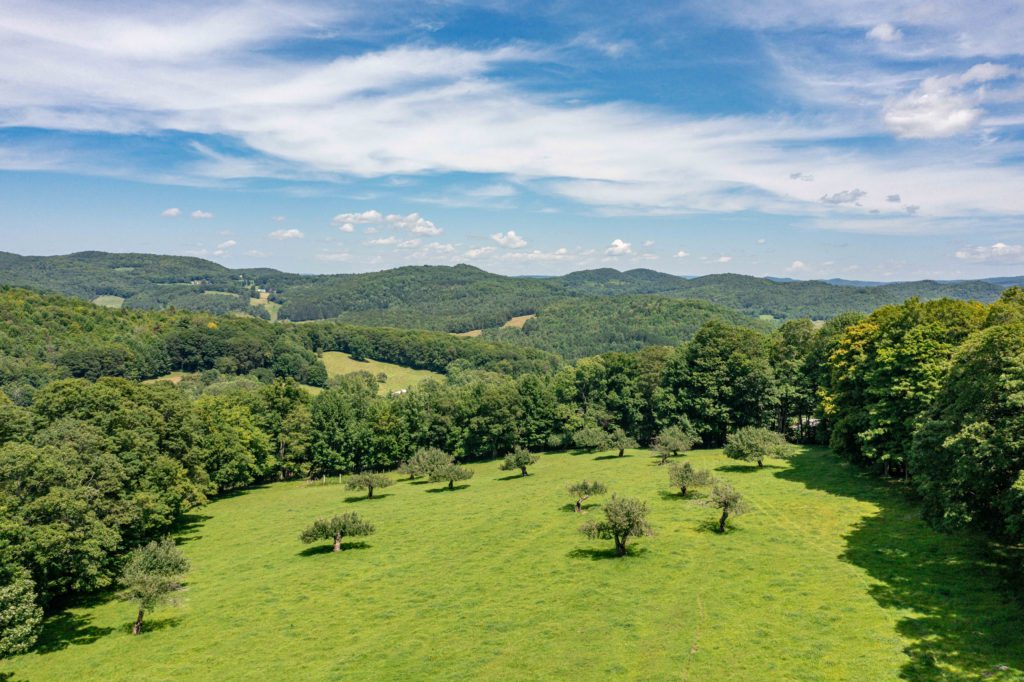 The apple trees are probably 200 years old and produce some of the most flavorful apples and cider you’ll ever taste. Once the grandkids came along, it became an annual ritual in October with friends and family to come up for the weekend to shake the apples off the trees onto the tarps and then press the cider.  We’d freeze gallons of cider for the winter, make applesauce, and the occasional apple pie.

The farm became the home for our annual Thanksgiving tradition – where extended family members would drive up from their city life and be treated to games of touch football, dodging the cow-patties in the field or going on hikes up to the top of Blue Gate Hill (the gate is still painted blue!) before sitting down to a feast at the large dining room table with the 20-pound turkey, multiple stuffings, homemade breads & pies and other delicious delights.

The upper field is a special spot on the property, as the view is always breathtaking and it’s a favorite spot for a picnic meal! We’ve often talked about building a lean-to or cabin to spend a night out under the stars. Our second favorite spot would be the front porch. 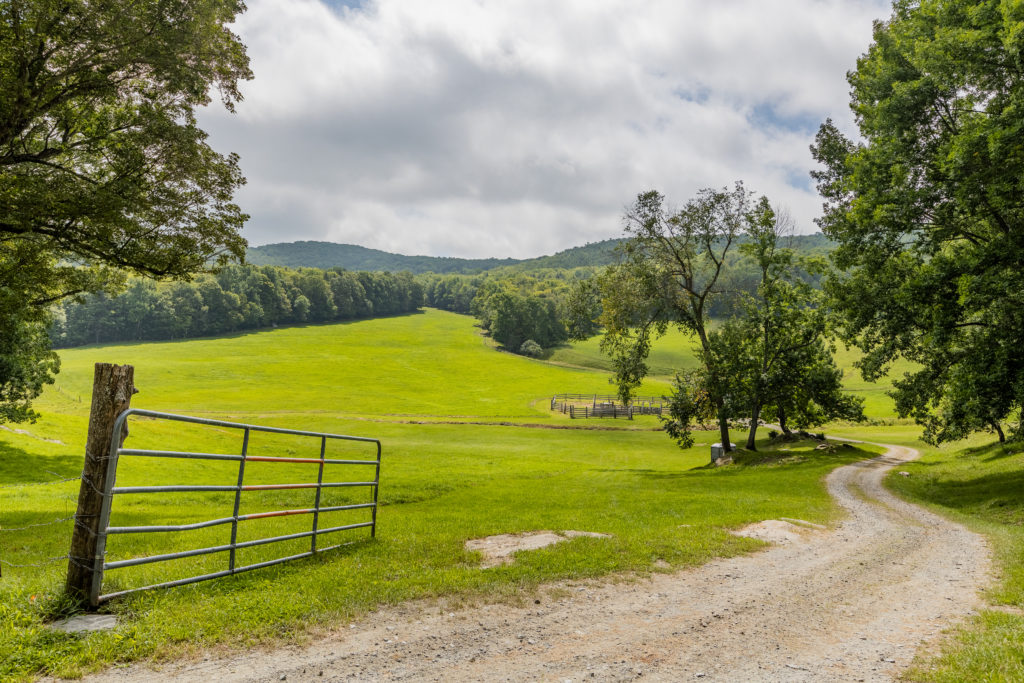 Prior to the mid-1990’s, none of the roads in Pomfret had formal names. Our road was just known as Blue Gate Hill Road. When telling someone how to get to the farmhouse from White River Junction, we would tell people to take the Pomfret Road, past the Post Office, church and then after the fire station take the first left (opposite the white house with the barn attached).  Then drive 7/8ths of a mile up the hill and the barns will be on your right and the white farmhouse on the left. 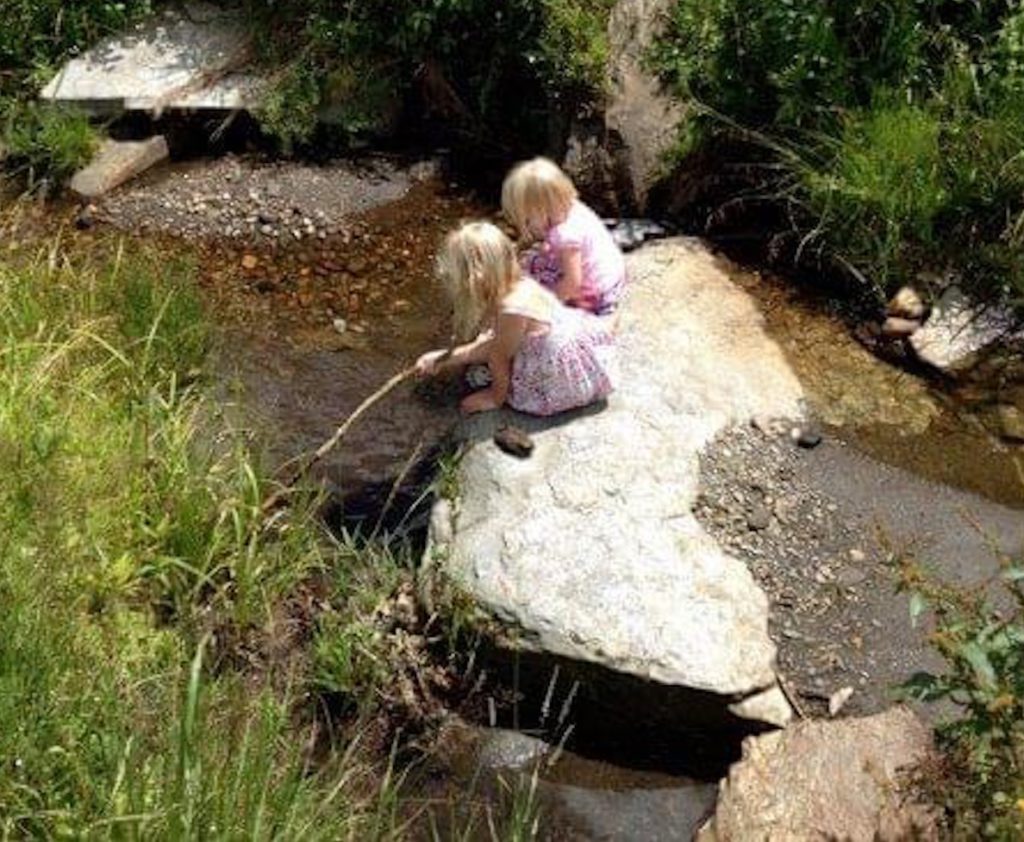 There are multiple springs and brooks throughout the farm that could support the construction of a pond. These springs and brooks provide the water for almost all of the pastures for cattle to graze. The original spring that feeds the house is in the middle field, just above the elevation of the house, so that if we lost power, we could still get running water to the house. We now have an artesian well with generator back-up, but it’s a nice option if something fails. That same spring has a spigot in the brook that allows us to provide water to the cattle when they are in the corral. 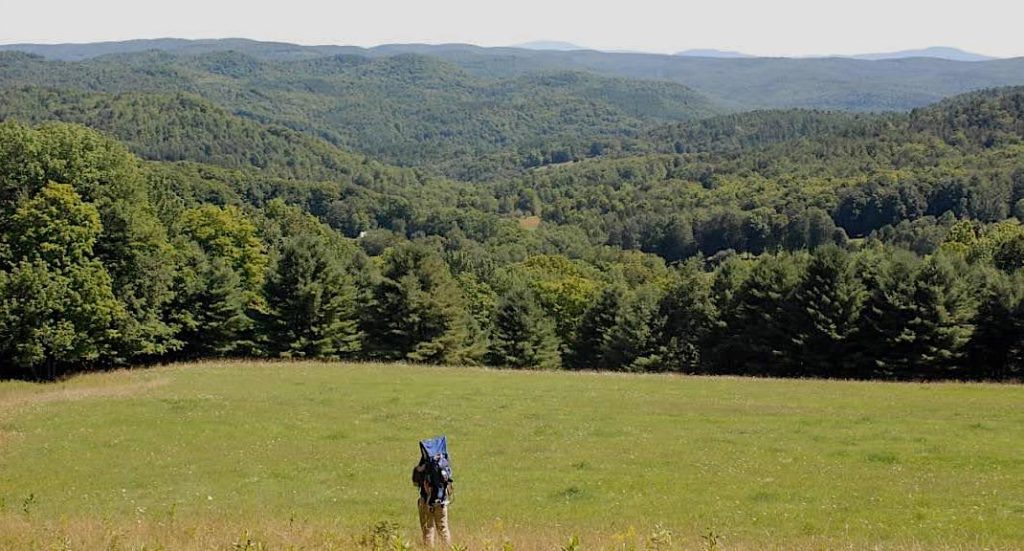 There are logging roads throughout the property that make great mountain biking and hiking trails. The Appalachian Trail borders the southern boundary of the property just above the Upper Field.

There is a board in the pantry closet that has the signature and date from the carpenter who built (re-built) the existing house in the early 1900s. My dad’s contractor found it hidden in the walls when they did the remodeling in 1976. His carpenter then signed and dated it as well. 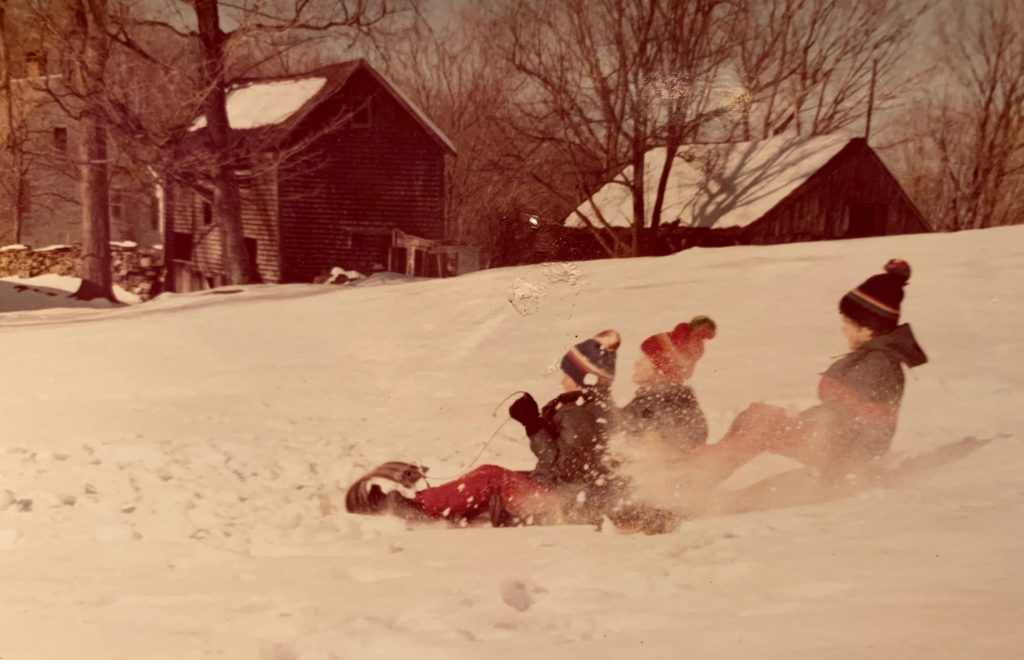 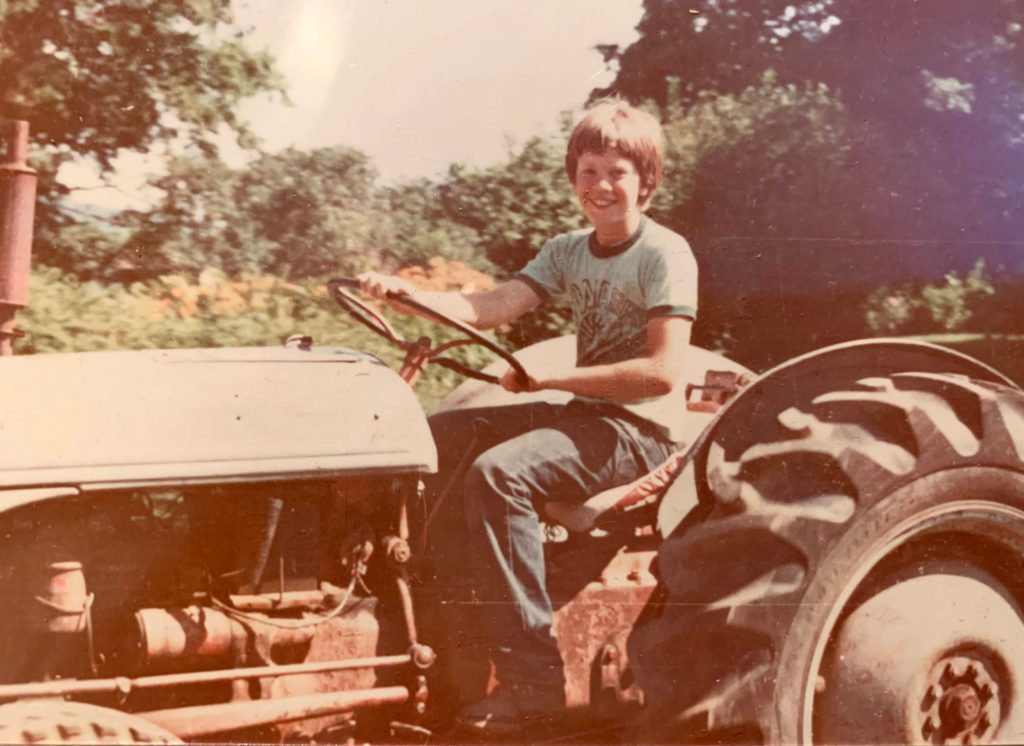 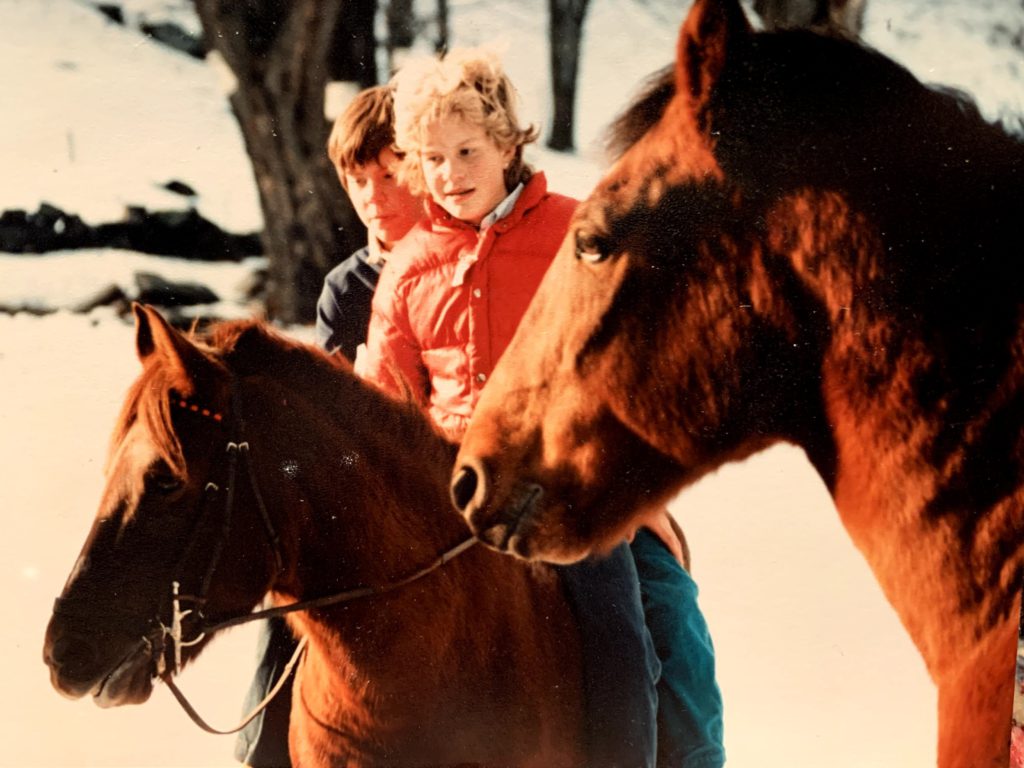 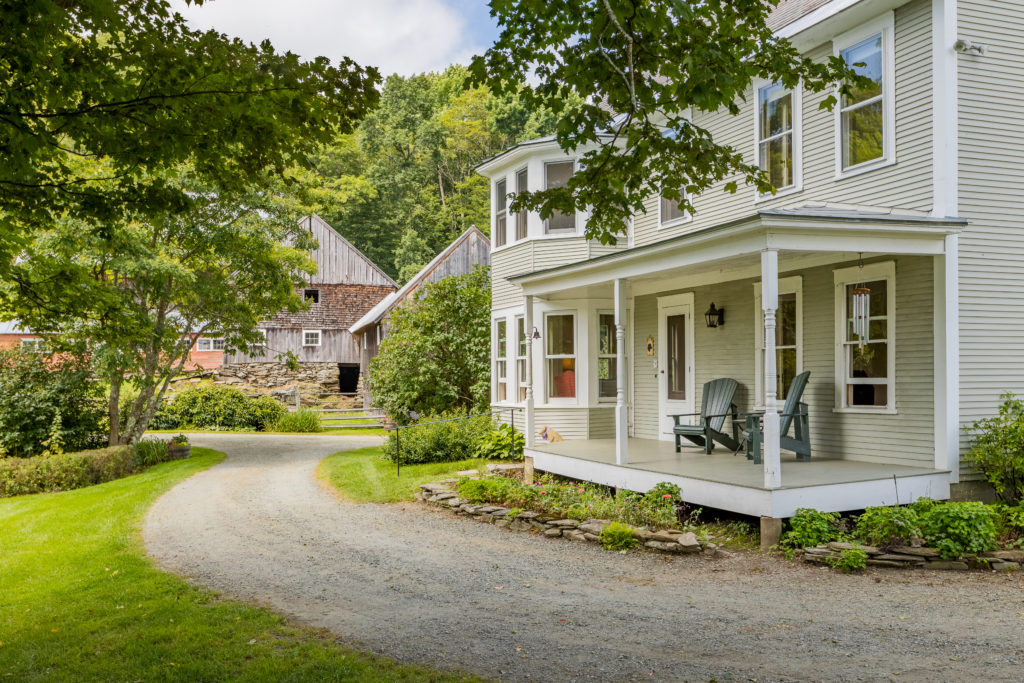 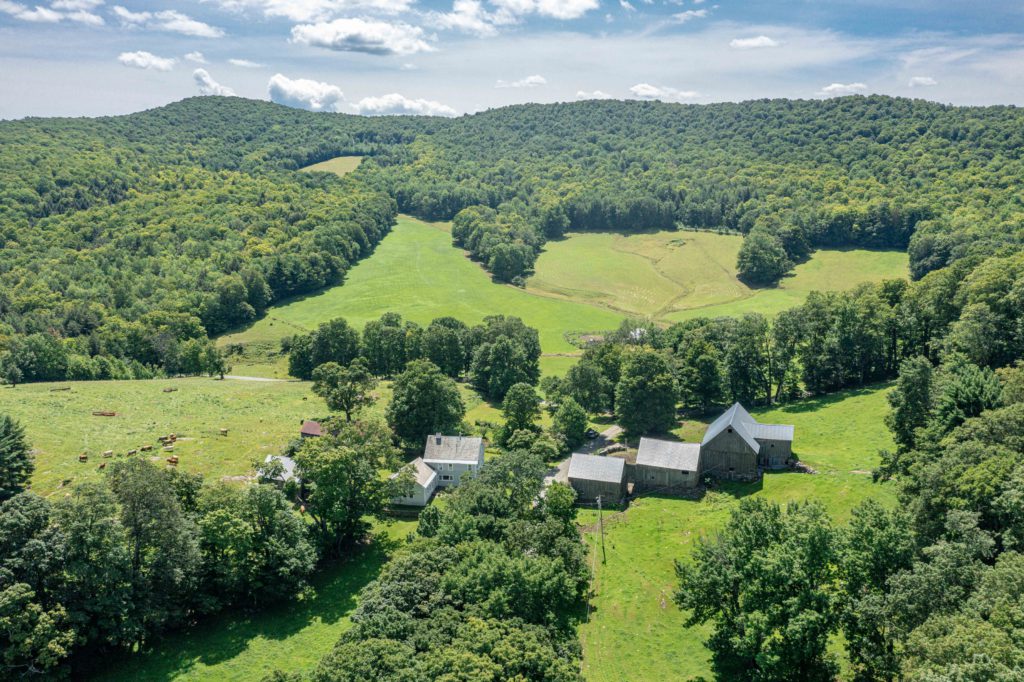 The family is looking for the next steward of their 276-acre farm; someone who will love it as much as they have. Click here for more information.