While looking for a two-bedroom home requiring no maintenance, the current owners drove by the Dark Harbor House and instantly fell in love with her. There was just one catch—she had (at that time) 13 bedrooms and was in declining condition—but that problem dissolved, at least in the owners’ minds, when they saw the potential to recreate a magnificent home.

While staying true to the original design, starting at the foundation and working up, they restored virtually every part of the house to 21st-century standards. 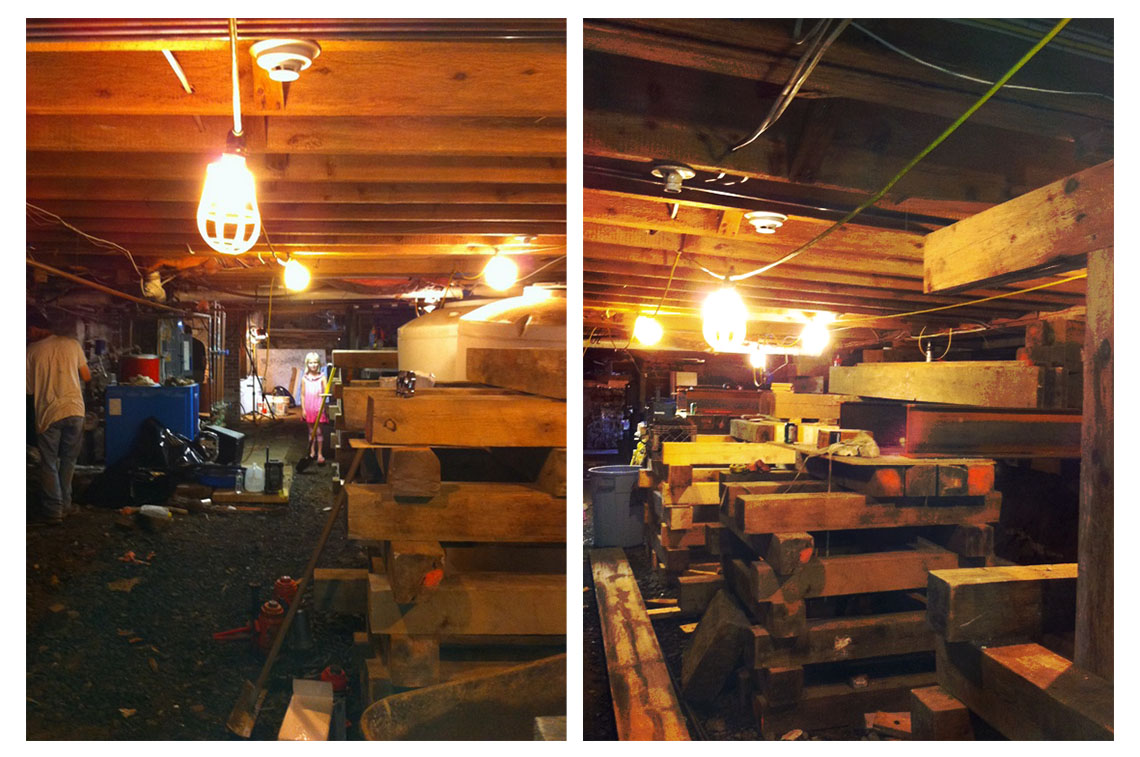 The owner’s first area of focus was the dirt basement and crumbling foundation. They jacked up and leveled out the home, and laid new footings and foundations while strengthening the outer stone walls. A concrete floor was poured in the basement as well as all crawl spaces, ensuring an entirely useable and dry basement.

Years of settling had put strains on the structure.  Throughout the house, removal of flooring and walls necessitated the inspection of structural supports. 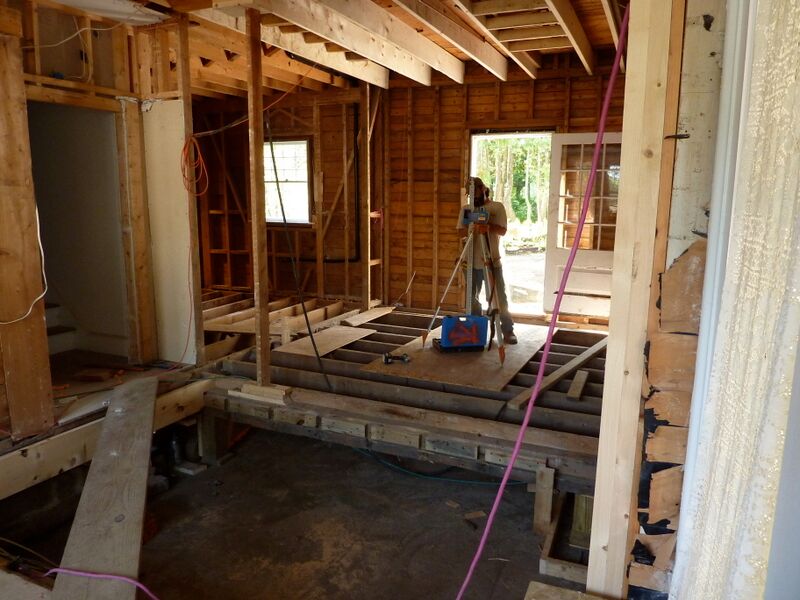 Studs and joists were consequently either replaced or strengthened, and new foundation supports were installed. Settling also meant much of the wall and ceiling plaster had cracked. As a result, almost every room had new plaster applied, supported by woven fiberglass cloth for additional strength. All chimneys were inspected and repaired as necessary. 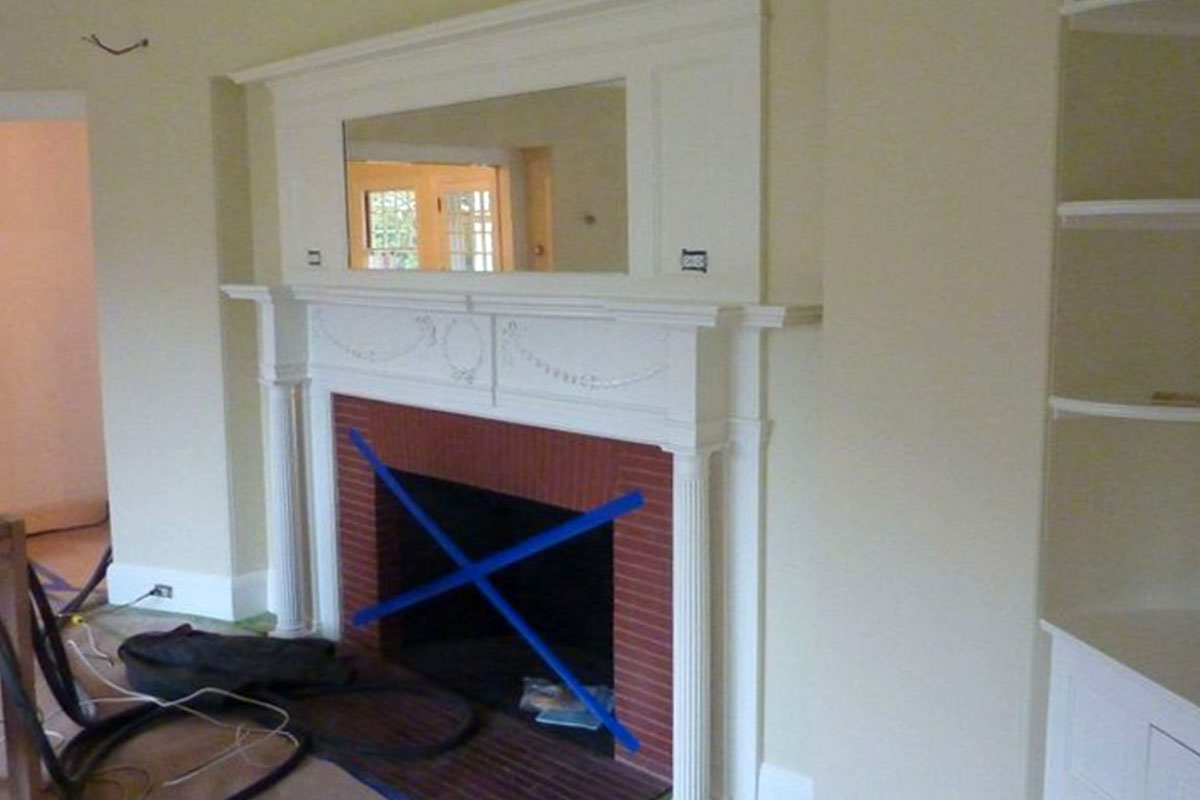 Today, there is a total of nine working fireplaces spread throughout the house:  seven wood-burning and two gas ones. Particular care for the ornate fireplace mantles was taken with the restoration of all millwork. Modern romex coax cable replaced old knob-and-tube wiring. A 10kVa generator, to supplement the electrical system, was installed to provide backup power.

On the outside, the entire house was stripped to bare wood, removing any lead paint that might have been used in the past. 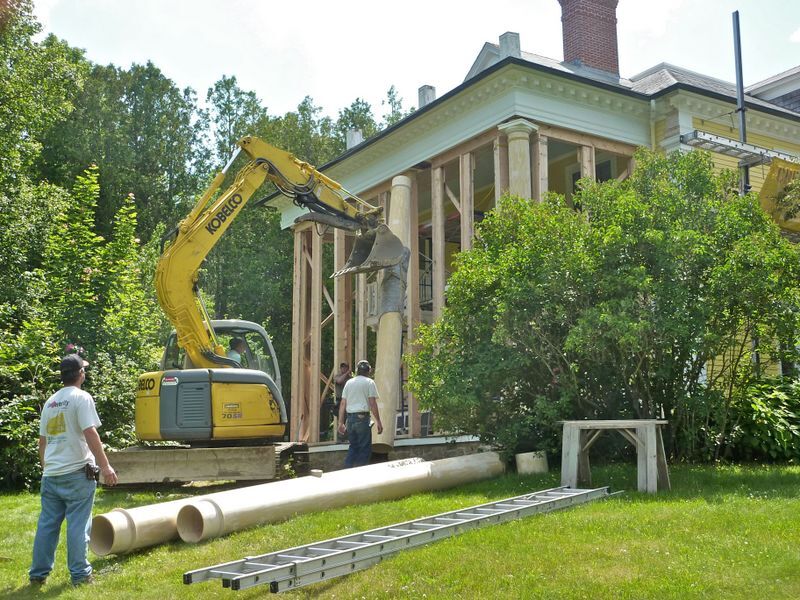 Siding/mill work was repaired including four new fiberglass columns on the east side of the property and the house was primed and repainted. They added a new roof along with copper gutters and new copper flashing.  Underground pipes were laid to ensure rainwater was directed to the lower edge of the property and away from the foundation. 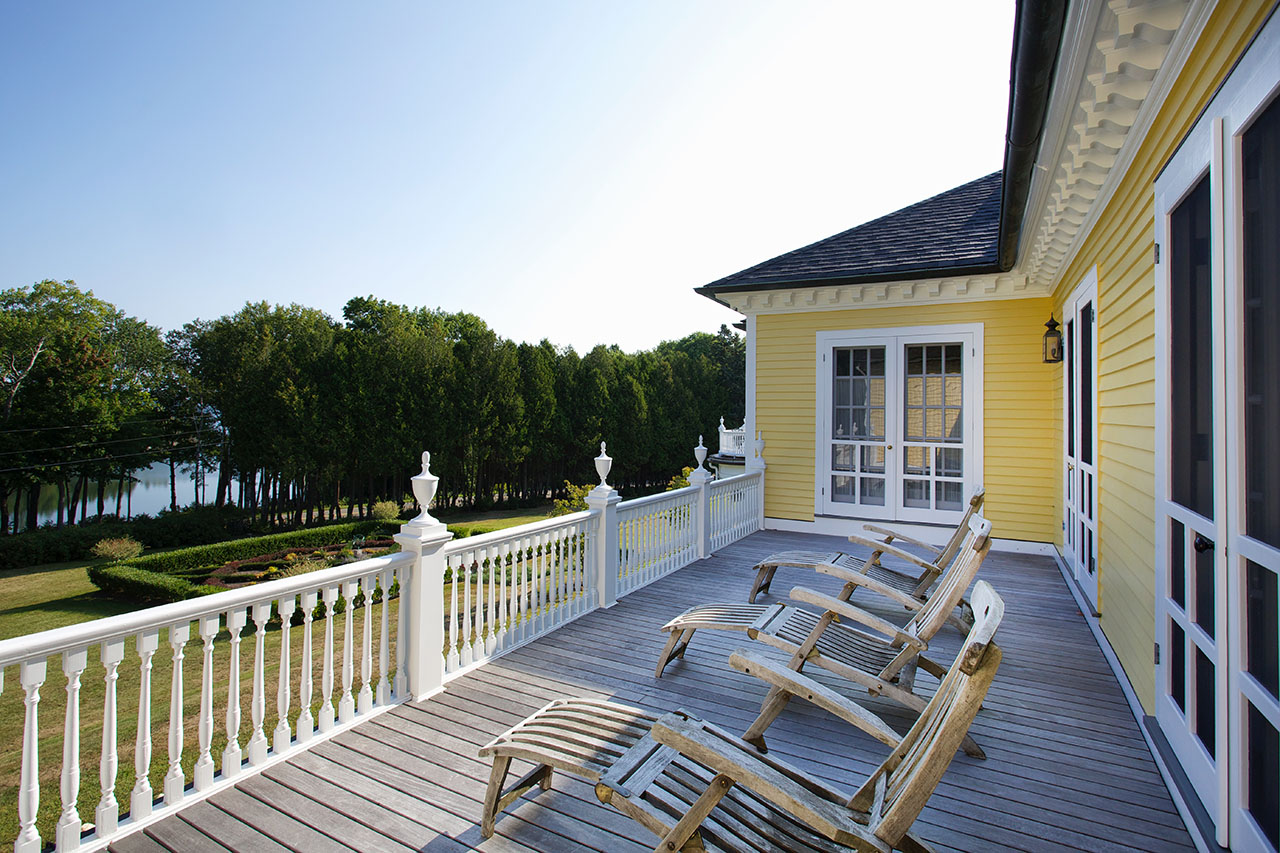 One of the more notable design elements of the Dark Harbor House is the extensive decking.  Ipe was used to completely rebuild the long deck that overlooks the Dark Harbor Pool, as well as all decks off the second floor.  This long-lasting, tropical hardwood, is fastened to aluminum rails, and then laid on the newly installed rubber roofing material.

While the main entrance leads into a magnificent parlor, the owners wanted more convenient and direct access to the kitchen area. Subsequently, they added a door in this area, blasting out a surrounding stone ledge to create the “Kitchen Patio” with its unique wood-cooking grill and adjoining herb garden. 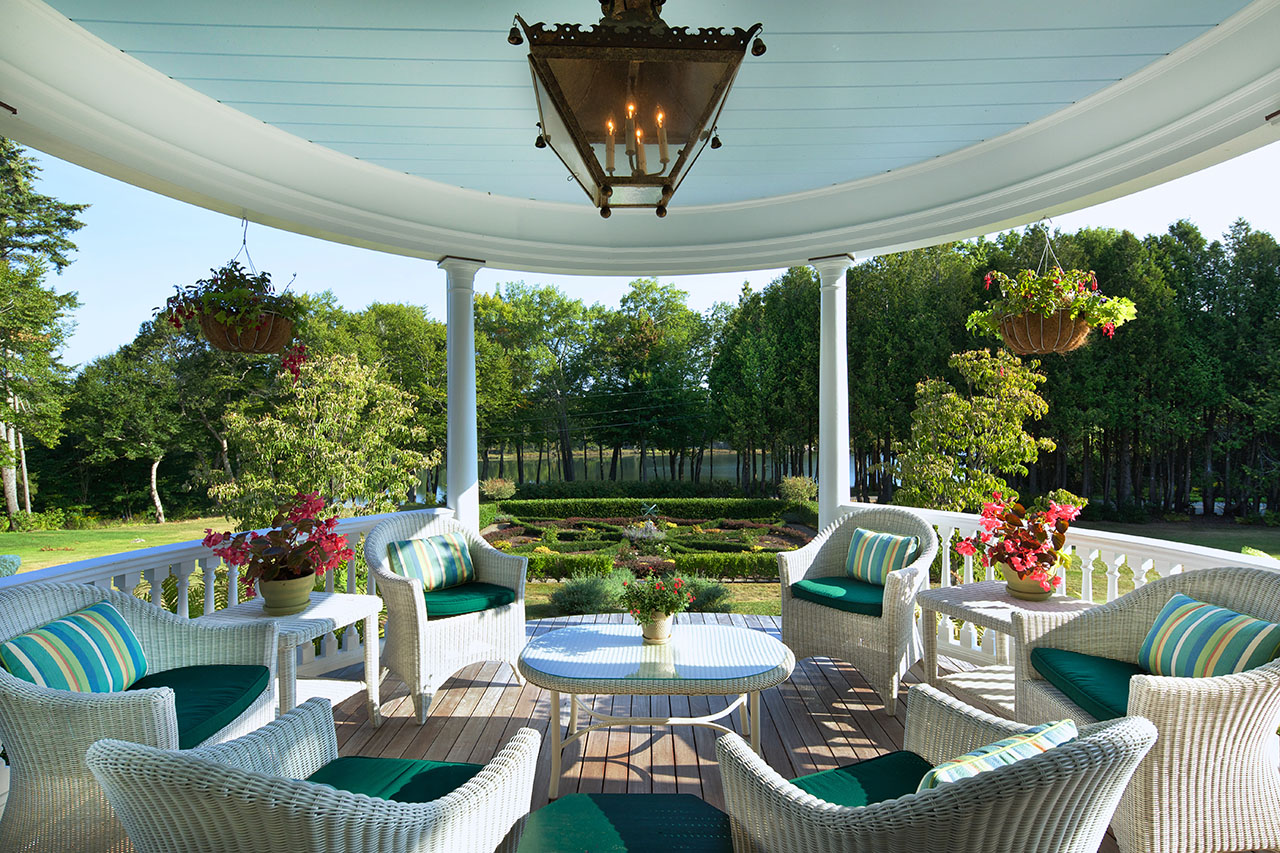 One hundred yards to the west of the main home they built a new 2-½ car post-and-beam garage where they moved the generator and propane tanks so as to be unobtrusive. They also installed an electrical transfer station and new circuit breakers in the home’s basement, along with a new security system throughout the house. 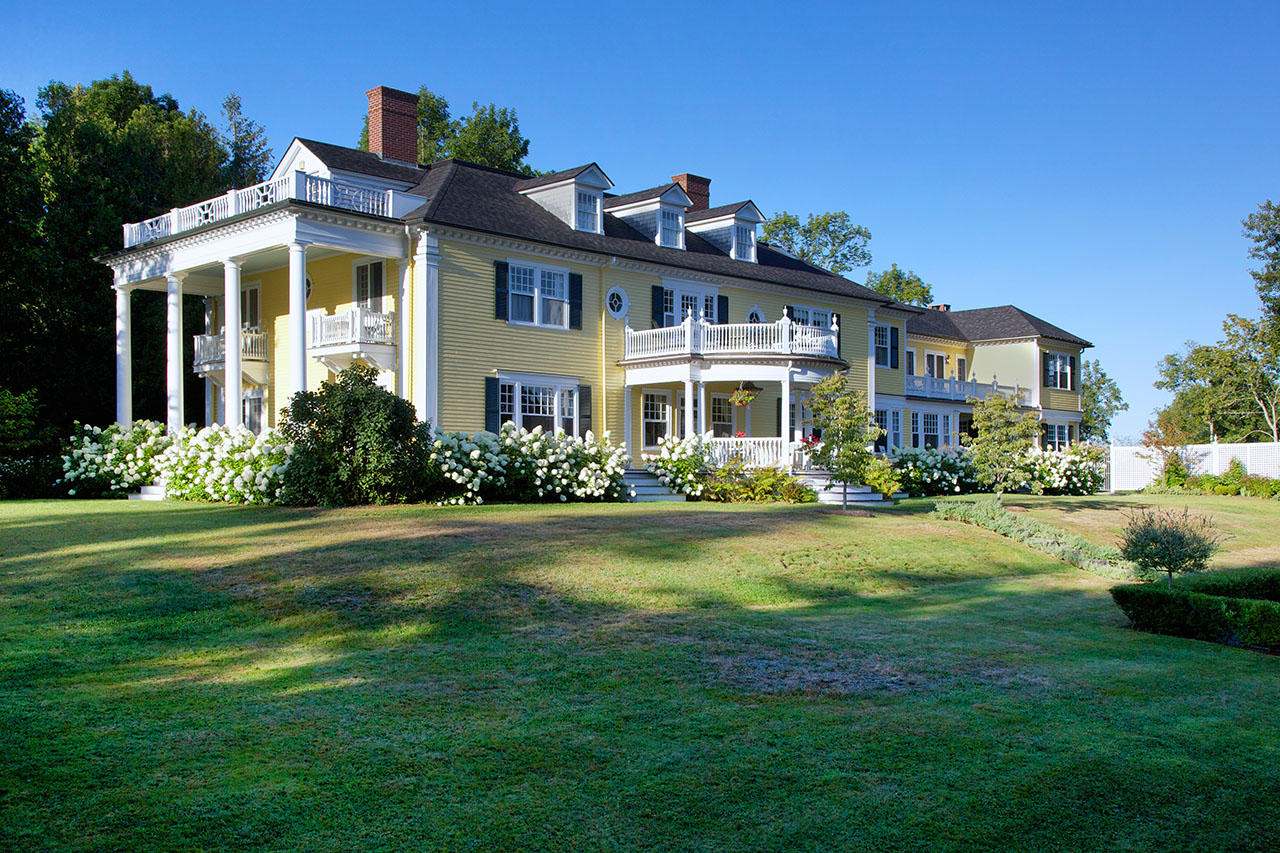 At this point, the Dark Harbor House was “better than new” and it was time to decorate. That will be our next blog.

Looking for a home in Islesboro Maine, and love the charm and elegance of yesteryear but not looking for a project? Find out more about this beautifully renovated Dark Harbor House on our website, read our previous blogs, or contact Terry Sortwell or Joseph Sortwell in our Camden office for other waterfront homes in coastal Maine.