In Middlesex County, Massachusetts, in the first half of 2012 the inventory of high-end listings shrank by about 10% (179 vs.193 listings in 2011). This seems to be a trend that started in the third quarter of 2011 and signals a more healthy balance of supply and demand.

First half high-end sales improved significantly compared to last year (54 vs. 42 in 2011) and are 26% above average levels for the past 12 years. Peak high-end sales for the first two quarters occurred in 2007 with 61 sales and in 2005 with 60 sales. The first quarter of 2012 started off slowly with 15 sales, but the second quarter was hot with 39 sales, the best second quarter performance since 2004. 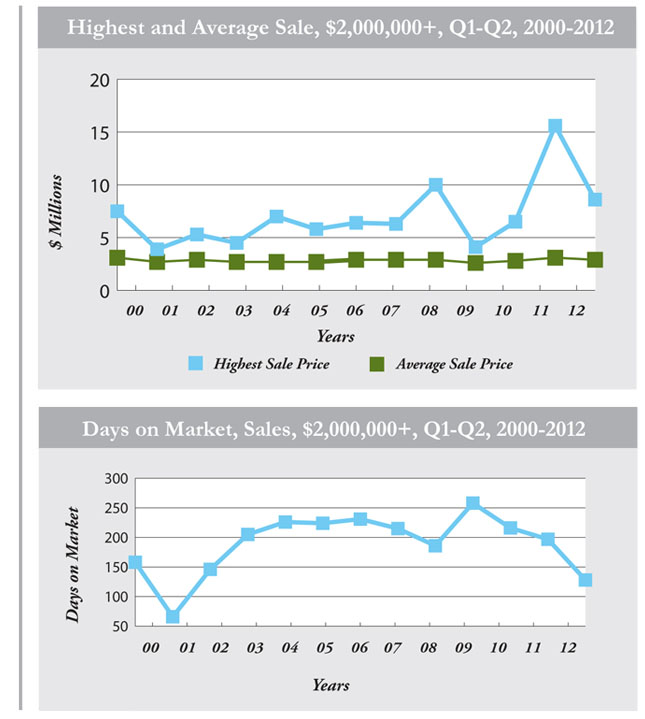 Days on market for first half high-end sales have varied considerably over the past 12 years. Average days on market for the first half of 2012 were 128 vs. 197 in 2011, 216 in 2010 and 258 in 2009. The average days on market for the first half over the period 2000-2012 was 189. The improving balance of supply and demand seems to be proving itself in quicker turnover. Despite the continued uncertainty in the market, special properties expertly presented and well priced are selling, and at record prices. Buyers are well-informed regarding current market realities and remain hesitant to take on projects. Land has been mixed with developers being particularly risk averse and banks being uncooperative.

This post was brought to you by Stewart Young (syoung@landvest.com). Whether it’s an elegant Greek Revival in Lincoln, a 130 acre farm in Medfield, or a waterfront summer estate on Stage Harbor in Chatham, Stewart advises buyers and sellers of some of the most distinctive properties in Massachusetts with a focus on Cape Cod, and the Metro West area of Boston. View Stewart’s current Real Estate listings.

The LandVest High-End Market Watch is a periodic review of select high-end markets in Maine, Massachusetts, New Hampshire, Rhode Island, Vermont and the Adirondacks. Market data is collected from Multiple Listing Services and does not include private listings. LandVest makes no representation as to the accuracy of the data and therefore is not responsible for any actions taken as a result of use of or reliance on this information.