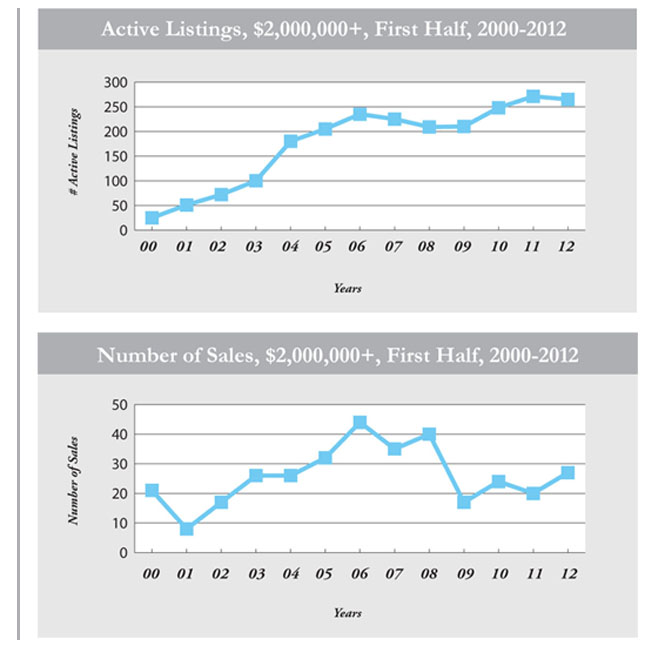 On Cape Cod, Massachusetts, the inventory of high-end listings in the first half of 2012 shrank slightly from the previous year at this time, but still is at nearly record levels (265 listings vs. 271 at the same point in 2011). At the very high-end, there are 37 listings over $5 million and 13 over $10 million. In the first quarter of 2012 there was a flurry of activity with 13 sales compared to 6 in the first quarter of 2011. Unfortunately this pace was not sustainable in the second quarter, but it was the same as the second quarter of 2011 with 14 sales. As a result, first half high-end sales grew significantly from 20 in the first half of 2011 to 27 this year. The peak for first half sales was 44 sales in 2006. Overall, the Cape Cod market continues to underperform and suffer from bloated inventory, particularly at the highest levels. At the $5,000,000 plus level, there are 37 listings and 4 sales in the first half of 2012. There are 13 listings above $10,000,000 and no sales in the first half; however, there were sales at $8,600,000 and a LandVest sale at $6,000,000. Across New England LandVest brokers reported similar erratic behavior with generally a stronger first quarter and weakness in the second quarter. 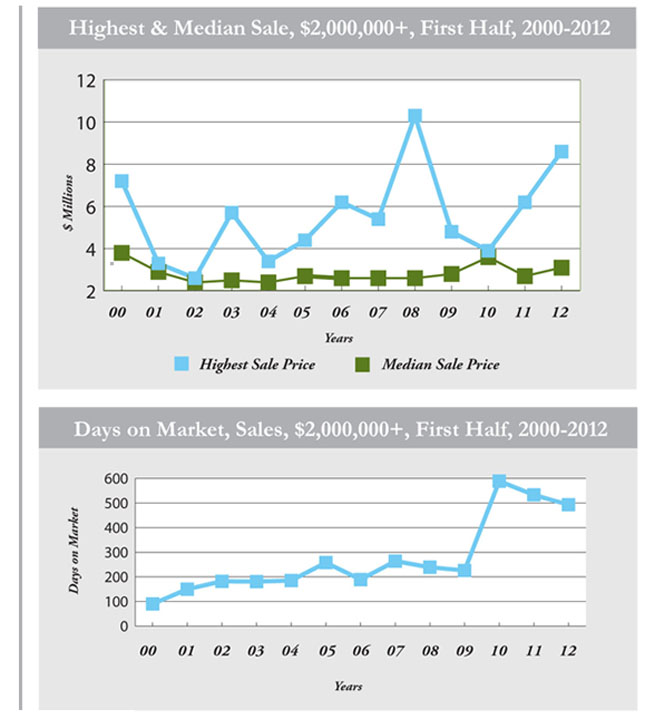 Starting around 2002 the high-end market on Cape Cod broadened as the perennial top markets were perceived as being too expensive and as buyers bid up the prices of special properties in other towns. By 2006, 13 of the 15 towns on Cape Cod were recording sales above $2 million.

This post was brought to you by Stewart Young (syoung@landvest.com). Whether it’s an elegant Greek Revival in Lincoln, a 130 acre farm in Medfield, or a waterfront summer estate on Stage Harbor in Chatham, Stewart advises buyers and sellers of some of the most distinctive properties in Massachusetts with a focus on Cape Cod, and the Metro West area of Boston. View Stewart’s current Real Estate listings.

The LandVest High-End Market Watch is a periodic review of select high-end markets in Maine, Massachusetts, New Hampshire, Rhode Island, Vermont and the Adirondacks. Market data is collected from Multiple Listing Services and does not include private listings. LandVest makes no representation as to the accuracy of the data and therefore is not responsible for any actions taken as a result of use of or reliance on this information.